As Estée Lauder famously said, "I never dreamt of success. I worked for it." As part of the POPSUGAR Insights 2016 Career Report, we surveyed over 2,000 women between the ages of 18 and 49 to ask them about their personal career aspirations, their entrepreneurial dreams, and who they look to for career advice, support, and inspirations.

Next, we asked women where they obtain relevant advice to help them navigate their careers. Overall, women look to their spouse or significant other (29%) to be a career resource, with women between the ages of 30 and 44 10% more likely to do so than women under the age of 30. One in five women seeks out the opinions of her parents, with women under 30 50% more likely to rely on their parents than women overall. Ten percent of women rely on their colleagues at work to provide them with career advice, and women under the age of 30 are 20% less likely to seek out a colleague. Less than 10% of women overall seek out advice from career websites or influencers, proving that this type of advice is lacking in the current offerings and that there's an opportunity for brands to fill this void and provide important career advice from successful individuals who have been there before.

Finally, we asked women to share what they consider to be their dream company and the person they would most like to work for. Topping the list of dream companies by a wide margin were Disney and Google, while a relatively larger percentage of respondents indicated that they did not have a specific dream company but rather would want to work at a company where their opinions and contributions were valued. In terms of who they'd love to work with, the individuals who were most frequently mentioned included President Barack Obama, Oprah Winfrey, Bill Gates, and Richard Branson. Current presidential candidates Hillary Clinton and Donald Trump were also frequently mentioned by respondents. 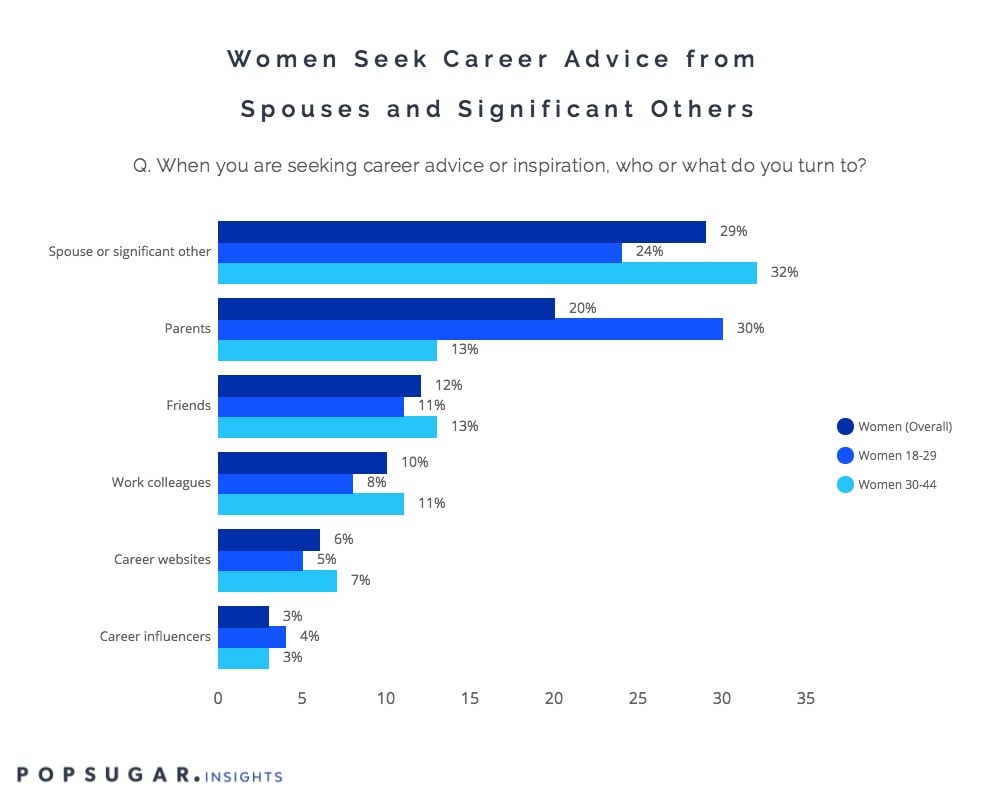 Women Cite High Expectations as Roadblock to Career Success
7 in 10 Women Have Work-Life Balance, but 1/2 Don’t Take Time to Focus on Their Health
Women Under 30 Seek Higher Salary, Better Benefits, From Their Next Position